They say all living things have their purpose. Midges are food for larger creatures. Mould helps recycle dead trees. But what about ramblers?

It turns out that even the red-socked roamers have a useful role. Sometimes they take photos of large rocks which boulderers haven’t yet discovered. Crag Stones was such a place.*

The crag is a hilltop holdfast for a clutch of stray gritstone soldiers. These four stout sentries have held their positions for many a century, guarding the Bowland realm against southern invaders. Judging by their haphazard positions, the years of solitude have driven them to strong drink and a shirking of duty. They have long since ceased to defend the land, which explains why Bowland is now riddled with ramblers.

But I call upon you, oh thou boulderers of England. Let us bring purpose to these forlorn gritlumps. Let us harness the might of the sitstart and raise high our glowing toothbrushes.  To arms! To arms! 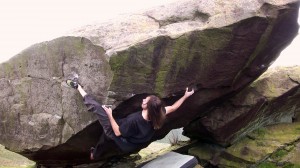 What can you expect? First of all (and this will deter the unworthy) you can expect to walk. Recent changes have been made to the footpath, but the boulders can still be accessed via any of these three routes. After wet weather, bring wellies – it can get boggier than a Yorkshireman’s cuppa.

1. Take the footpath near where the style used to be. This leads through nearby trees. Split off from this path to regain the old permissive path. It is possible to stay on access land all the way to the crag.
2. Park to the north and take the public footpath to the building marked Stone Fold on the OS map. You can then go across access land over Crag Hill to access Crag Stones from the the back.
3. Park in the north and walk down the access road. This is likely to be a longer walk, but could be a good option in wet weather when the footpath is boggy.

Once at the rocks, expect sitstarts, fine-grained grit and some amount of burl. It’s a beautiful spot with big views. You are likely to have the place to yourself, though if you want to be sure you can ring this number to check:

Here’s a video which shows most of the problems, including the standout 7A Black Whirlwind with what has been described as “one of the best moves in Lancashire”.

And if you are cranking at around 7B, this traverse is a splendid target to aim your guns at.

Finally, the last great project was gobbled up by a psyched Mike Adams. Perfect Storm 7C+/8A. The low start to Black Whirlwind, done from a specified starting position of RH undercut and LH in the small crack on the face. This one looks fierce!

So go forth, boulderers! Go forth and conquer. Just don’t forget your wellies.

*It had actually been climbed on before. By Karl who mentioned it on UKC. Which lead to the discovery of the photo. But I still hold to my claim that in theory at least, ramblers have a reason for being on this earth.