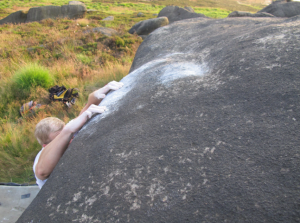 Lust Is A Downward Slope, 6B+

The only reason I’m telling you all this… apart from pointing out that you might like to provide a loving home for one of the many offspring of this unusual reproductive process – your very own shiny, squalling copy of the Lancashire Bouldering Guidebook to nurture and cradle …ahem, the only other reason I’m telling you all this is because it means I am now free to sing once more of rocks and rock places. 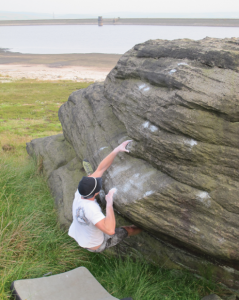 Today’s ode concerns a crag that I’d first seen on both the map and the magical geograph website, where walkers upload photos and link them to map coordinates. Unfortunately, walkers often take unhelpful photos of the view from the crag, not the view of the crag. Sometimes a tenacious rock-hunting photo-browser (that’s me) might catch a hopeful glimpse of accidentally photographed gritstone forms edging shyly into view. But in this case, the only photos on the web seemed to show boulders that were just too small. Luckily, I had a further tip-off from Bruce The-Oracle-Of-The-East Goodwin. He’d happened on these boulders whilst on a walk and reckoned they might be something special. He was right. 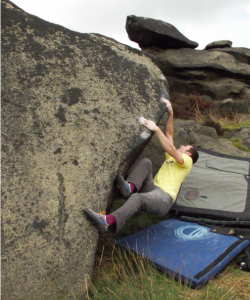 He was very right. Stony Edge is brilliant. Bouldering on the beach? You got it. Easy lines with grassy landings. Tick. Dreamy moorland surrounds? Verily. Techy 6’s to make you smile? Oh yes. Powerful 7’s to sate your hardcore lust? Affirmative. Projects to throw yourself at? Absolutely. Stony Edge is a real peach, and not just any old peach. If one peach in the peach world was peachier than the rest, that would be Stony Edge. The peach of peaches. 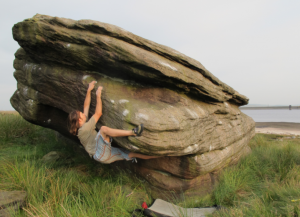 Will Stony Edge take its rightful place in the pantheon of gritstone’s friendliest crags? Unlikely, but only because the world is cruel and unfair. Allow me to draw illogical parallels in the canine world. The Staffordshire Pitbull is short-sighted and not interested in anything beyond the Roaches, nevermind beyond the peak district. And the Yorkshire Terrier is too busy yapping at everyone as loudly as possibly, in an effort to prove it’s really, definitely, most certainly not a small dog. As a result, nobody has heard of the Lancashire Heeler. It’s a little dog with short legs and it’s often overlooked. If you squint, you’ll see that Stony Edge is a Lancashire Heeler in disguise. No, really. And between you and me, it’s much better than the others. As wikipedia says, “it is actually a very strong dog.

Together with John Wilson, I spent the endless summer of 2013 exploring the boulder clusters which bejewel the East Lancashire Moors. After Blackstone Edge, Stony Edge is the most extensive. There are roughly a hundred problems, with 15 from 7A to 7B and loads at every grade below that. For harder stuff, you’ll have to get stuck into the projects. To put that in perspective, it’s the same number of problems as Thorn Crag. Like Thorn Crag, you’ll have to walk for 40min to get there, but the problems at Stony are much more densely packed. Unlike Thorn Crag, there are very few highballs. 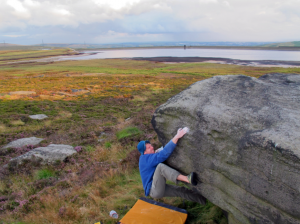 So here’s a media megamix of Stony moments. First are some moving pictures of Stony Edge 6’s, climbed here on a warm but windy day when other crags around the land were smeggier than a smeg and cheese sandwich. Not so Stony Edge!

And here are a few of the 7’s which I remembered to get on camera. I failed to film as many I usually do – mainly because the crag vibe always mellows me to somewhere left of lazy. I really should have filmed Weakness Leaving The Boulder, Fight Shapes With Shapes and The Grit Exam, three of my favourite Stony Edge 7A+’s. But I didn’t. I filmed these. All of them are rather fine problems, except Beach Mechanics which is a gnarly hip-popper of the pop-most degree…

Come ye, rummagers, delvers and questers. Come ye, snufflers, furtlers and seekers. Come all ye intrepid explorers of esoteric realms, for on the hills twixt Edgworth and Blackburn abides a minor glory of a crag, an angel fallen with crumpled wings, a rambling ramshackle drunkard of a crag – shambolic and tumbledown, but divine nontheless. Here lies Roundbarn, where from the depths of distraught rock, glimpses of perfection hint at all that might have been. 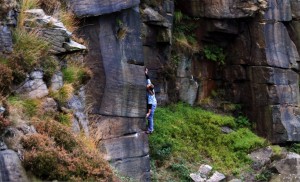 Yes, it’s a pile of choss. And that statement will deter a great many would-be suitors. Good riddance to them, for their minds are small and their hearts are shrivelled. Doubtless they will spend their days gawking at the spectacle of this land’s mainstream blockbuster crags, following the masses and enjoying their ignorance. Experiencing the indie crags requires something more from us, but it gives more too. It gives room for interpretation, which is also room to attach ourselves to the place in a way that is much more personal. When bad rock coalesces with the good; when litter sits by heather in bloom; when roads slice apart idyllic views and above all when reality infringes on our playground – then we have a choice to make. Recoil, retreat and never again visit such a multi-coloured dimension. Or open our imagination to accept both beauty and the beast, and let that spirit guide our chalky hands.

Are you still reading? Flippin’ ‘eck. I thought that would get rid of you.

You’ve got a good idea of what Roundbarn is by now. It’s the sort of place you probably aren’t going to visit, unless you worship at the altar of esoterica. Or perhaps you live nearby. If you do, you might find that on a sunny day it’s actually rather tranquil. The ravaged lower tier may not be climbable but it does provide a dramatic space over which to cast your eyes. The small collection of boulder problems have some good moves and are mostly fast drying. Catfoot 6B+ is baffling, Whisker 7A has a crux lunge just a whisker too high for comfort and several of the easier problems have uniquely shaped holds. Here’s a video. Now go and climb somewhere else.